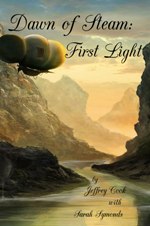 There are people in this world who are going to love this book without reservation.

I am not one of them, but that doesn’t mean they don’t exist.

Let’s start with this:  There’s a gentleman’s wager on the table in 1815 about what unexplored areas of the world look like.  Our intrepid hero must recruit a crew and go exploring in order to satisfy the wager.  On the way, he is beset by some weird stuff.  Things happen.  Things that have capital letters, like the Year Without a Summer.  The other guys in the wager are looking to cheat. So, we’ve got a setup here for a possibly good if a little trope-heavy steampunk novel.

But there’s a couple of problems right off the bat. To begin with, the tech level feels wrong.  When I see a title like “Dawn of Steam” and the time period (1815), I am envisioning the early beginnings of steampunk tech.  Call me crazy, but if we’re going for an alternate-history steampunk (and we most definitely are, here), it feels like we should at least place the tech at the right level.  Steampunk is generally Victorian, because that’s the age where steam really takes off as a technology.  That age begins in 1837.  To be sure, there were steam engines before that, but those engines were highly experimental and dangerous.  The first public railway didn’t open until ten years after this novel is set. Now, steampunk is definitely alternate-history, but I’m never given a sense in this book of what exactly the heck happened in our history to create this alternate.  Someone must have invented the steam engine far, far earlier than normal history; I want an explanation for that!  As it sits, the tech feels like it’s been cut-and-pasted from a steampunk archetype warehouse into 1815, for no better reason than the author thought it would be cool.

This, however, is not the primary problem with the story. The primary problem is the method by which the story is told.  Now, I get how authors can get bored with traditional novel formats.  I get that there’s a temptation to use an alternate format in order to show your creative side.  Hell, I’ve even written a short story in an alternate format.  So I get the temptation.  But this entire novel is a cobbled-together set of letters, diary entries, notations, advertisements, and other primary historical sources.  It’s built to be a collected set of things about this guy, compiled at some point after he has his adventures. In other words, our author has put a painstaking effort into making sure that his book reads like the things textbooks were invented to make more interesting.  There’s perspective-shifting, there’s headaches, and generally speaking there’s a great deal of trouble to grind through the book and extract some form of a story from it.

There’s also a great sin of a prologue, in the form of the compiler’s note (followed by the second prologue from the publisher).  This prologue is not only long-winded and unnecessary, it essentially tells you everything you need to know about the book.  We find, from this prologue, that our hero was a great adventurer who managed to see and record his observations of these different places.  It manages to simultaneously be unentertaining while telling the reader it’s ok that you don’t want to keep reading, because I’ve just told you everything that’s going to happen.  You can stop now.  When we talk about prologues at our next con panel, this will be the prologue I point to as a demonstration of how poorly these things can go.  If you’re going to read this book, do yourself a favor and skip this part.

I said at the beginning of this review that there are people in the world who are going to love this book.  Let’s get to that.  Dawn of Steam can be an immersive experience.  It really is the equivalent of trying to sift through primary historical sources to figure out what happened.  In that way, reading the book becomes something of an academic effort, much like the ones the characters are making.  For people who love Steampunk because they absolutely love the setting, Dawn of Steam is going to be a great read.  It is a book whose very language wraps you up in the setting.  Cook does a great job of using the voice of his primary-source pieces to give a true feeling of authenticity to the whole thing, despite the inappropriate tech level.

I personally feel like this book needs an illustrator and an oversized print edition.  It’d be perfect as a coffee-table book, a conversation started.  Something to flip through idly while the host is up getting a new pot of tea ready.  The feeling of setting is really that pervasive. The problem is, that feeling of setting comes at the expense of getting to the plot, the characters, or anything else that makes one give a marmot’s whistle about a book.

If you just like to feel steampunky, and you’re not looking for a plot, then you’ll love this book.  If, however, you’d like the setting to serve the story and not vice-versa, look elsewhere.