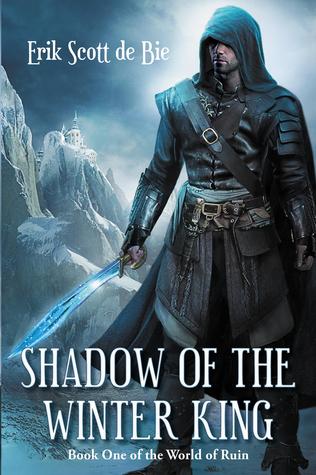 Let me start with a bit of a caveat:  I may not have the most neutral of perspectives when I review a work by Erik Scott de Bie.  When we first began to be authors, Erik was one of the authors who was flat-out supportive of us, even showing up at the first reading I ever gave despite it having a horrid time slot.  He’s a supportive, classy guy, so I’m bound to be favorably inclined to him.  Does that color my opinion of his work?  I would be shocked if it didn’t, but I’m giving the opinion anyways.

Ok, with that solidly out of the way, let’s talk about the book.

Shadow of the Winter King is de Bie’s break with his Forgotten Realms books and his foray into the world of indie publishing.  As much of a move as that is, it’s not hard while reading the book to rename a couple of things and imagine it as one of those books.  This is old-school sword-and-sorcery fantasy.  You can immediately pick out the characters that are going to be important via their connection to a magic sword.  Does this person have a magic sword?  Ok, then they’re going to be pretty central to the plot line.  The magic swords vary in flavor and abilities, but we are assured that (despite their seeming proliferation) they are very rare and valuable items.

That kind of old-school flavor always gets a nostalgic reaction from me.  Along with that old-school flavor we have a grim-dark antihero protagonist (wielding a magic sword, of course) who is on a quest to kill the evil sorceror (+evil sorceror sword).  In order to help him do this, he has recruited help in the form of the woman who once betrayed him and the entire kingdom (whom the antihero promptly returns a magic sword to).  All of this leads us into a classic situation where there really aren’t any good guys, just temporary allies.  There’s a sense throughout the book that, at any point, any one of these characters could pop off and murder any of the other characters (using a magic sword).

I can tell you right now that, if there is any murder, it will be described in amazing detail.  De Bie’s writing style leaves little to be desired in terms of setting the stage.  One smells the dank, nasty taverns and the horse-apple-littered roads.  The action scenes in this book are well-scripted and beautiful.  So many books skimp on the action scenes these days that Shadow of the Winter King really feels almost cinematic.

Ultimately, though, whether you enjoy this book is going to boil down to taste.  Let’s do word association.  “Grim-dark assassins and wagonloads of magic swords.”  If you’re a speculative fiction fan, you had one of two reactions to that phrase.  Either you thought “sweet,” or you thought “really?”  I’m one of the people who just accept the banality of the subject and enjoy the feel anyways – my reaction is “sweet,” but I comprehend the fact that it ain’t for everyone.  If you’re like me, though, and you think that phrase sounds awesome, then jump on the de Bie wagon and go for a ride.  Don’t expect to learn valuable lessons, but do expect for the bodies to hit the floor.

After, you know, being stabbed.  With magic swords.