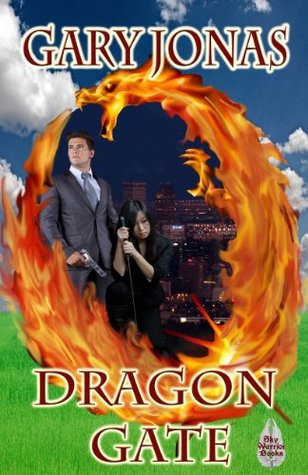 Those of you who’ve been following the site for a while know that I am an absolute slut for Gary Jonas books.  I space out my reviews of his, so it doesn’t feel like I’m just playing on the fanboy fiddle (even though that’s exactly what I’m doing). And so I will start with my gushiness:  Dragon Gate is another really good book from Jonas.  It’s the third of the Jonathan Shade books, which have been an overwhelmingly awesome series to date.

This time, Jonathan’s still dealing with the issues accrued back in Acheron Highway.  There’s a bundle of them. I don’t want to get into the details, because frankly a lot of them would be spoilers for those of you who haven’t read Acheron Highway, and all of you should.  It is still, to date, the best book I’ve reviewed on this site, and I don’t want to lay down spoilers.

There’s a family from another dimension here on a mission of vengeance.  In order to pay back some of the debts Jonathan racked up back in Acheron Highway, Jonathan and his crew get stuck with the task of protecting the yahoos that initially pissed them off. This is complicated by the fact that the soon-to-be-victims aren’t really enthusiastic about the protection. This is a solid book.  It’s a good ride, like all the Shade books, and it’s a lot of fun.

Everything I’m about to say I say in comparison to the rest of Jonas’ work.

After the amazing experience that was Acheron Highway, Dragon Gate is something of a letdown.  Jonas appears to be trying to branch out, and so he tells the story from multiple perspectives.  We rotate our vision from Jonathan to his companions and the people they’re protecting.  This, sadly, has the effect of weakening the Jonathan Shade voice that’s part of the charm of the series.  It’s an interesting intellectual exercise, to be sure, but it makes the experience of reading the book a little more watery than his first two offerings.  This feels less like a Jonathan Shade book, because that’s only a fraction of what’s going on.

The story is good.  The plot, the twists; they all hold up nicely, and this is still a very, very good book.  Again, Jonas’s writing is such that I don’t want to give too much away.

When I post a score on this blog, it reflects my experience reading the book.  It’s about how it made me feel to read it.  When that’s altered by some personal bias, I try to at least point that out in the review.  In this case, I’m pretty sure my enjoyment of this book was lessened simply because I came into it with ridiculously high expectations.  Jonas has been doing nothing but improving since I started reading his books, and I just naturally assumed that this book would be better than Acheron Highway.  In fact, here’s a quote from my review on Acheron Highway:

“Normally, at this point, I’d tell you to go read this book.  But don’t!  First, go read Modern Sorcery, the first book in the Jonathan Shade series.  You’ll like it, and then you’ll get to this book and realize that Jonas is constantly getting better.”

The problem is, when the book I’m instinctively comparing you to is Acheron Highway, you’ve got a really, stupidly high bar to clear.  And Dragon Gate doesn’t do it.  Dragon Gate is, independently, most likely a Four-Giant-F book.  It is very, very good.  But I couldn’t get that out of it, because I was constantly lamenting the fact that it wasn’t as stunningly great as AH.

So, all of that said, what’s my recommendation with this book?  You should still buy it and read it.  Dragon Gate is still a must-read, because it’s independently a very good book, and because Jonas doesn’t look to be stopping the Shade books any time soon.  I am unfairly docking it half an F for not being as good as its predecessor, which is a bar that no other book on this site has had to clear.  This means I’m holding Gary Jonas to a standard that I simply don’t hold other authors to, simply because those authors aren’t Gary Jonas.  This book is most likely just as good as many of the other four-star books I’ve reviewed, and you should definitely go read it.  But I couldn’t give AH more than four, so I have to give Dragon Gate something less.  As a result: